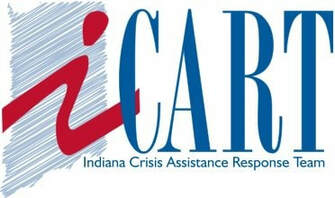 ​Our mission is to provide a network of trained professionals coordinated through a single system within Central Indiana to respond to the emotional and mental health needs of victims of disaster or traumatic events in a timely and planned way, including follow-up and referrals for those in need, all provided free of charge with dignity and respect for individual and cultural differences.

Unexpected traumatic events can overwhelm a person and a community physically, emotionally, and spiritually.  I-CART is a mental health crisis response team that assists victims and survivors at the scene of a traumatic event or at a designated site immediately following an event.  I-CART follows the National Organization of Victim Assistance (NOVA) crisis response and protocol.

​Since forming I-CART in 2000, the team has responded to a variety of callouts locally to schools and businesses.  In the aftermath of September 11, I-CART provided crisis support for international airline travelers stranded in Indianapolis, assisted airline personnel developed written support handouts an assisted other mental health agencies with Crisis Line support of individuals in the Indianapolis area.

I-CART team members were twice deployed to help with the response in New York City and New Jersey.  I-CART team members were deployed to serve following hurricanes in Mississippi and Florida and also provided community support following the wild fires in San Diego, California.  Our team has worked with Federal Emergency Management Agency to provide companion support to individuals that were dealing with local flooding and tornado disasters.  We worked in collaboration with Indiana Volunteer Organizations Active in Disasters.

WHAT DOES IT COST TO CALL I-CART TEAM?
​Our team members are all volunteers that bring their training and experience to the table to help and serve others. There is never any charge for asking the I-CART team to assist.
​Can I Be Trained and be Part of the I-CART Team?
YES! I-CART offers NOVA (National Organization of Victims Assistance) Training normally 2-3 times per year. Training is normally in or around the Indianapolis, Indiana area. Our website will provide current upcoming information on our training, so please check back with our site from time to time.
​Can we have an I-CART Speaker talk to our company, civic organiztion or service club?
​Absolutely. Please click on the “Contact” tab at the top and let us know more about your speaking engagement event and we will do everything possible to provide you with a speaker who will talk to your group about how we are trained and help people after a major crisis or disaster.